While on my vacation getaway to Thailand, I made a lot of new friends (as indicated in some of my previous posts). One such friend I neglected to mention. I will take the opportunity to do so now.

The Aussie arrived about two days before the end of the trip and accidentally inserted himself into our group when he hopped onto our mini-van shuttle to one of our excursions. The second he hopped on, all of the girls instantly gravitated toward him. No one blinked twice- the ladies were all enamored with the Aussie. It was easy to see why- he had a megawatt smile and the charisma of a certain Mr. Clinton, captivating every person that entered his sphere of presence. You can imagine it was pretty hilarious to watch the resident guys’ (in our group) reactions to this ‘new guy.’ He was in his early thirties, traveling alone on this portion of his holiday.

The Aussie shook my hand that day, but that was all.

It wasn’t until the final night that I began getting to know the Aussie. I wasn’t expecting to ever see the cat again, and as I know from world travel, the most amazing people you meet tend to remain with the memory of the trip. This was a bit different though. I discovered the Aussie would be in L.A. for a few weeks this summer. And perhaps we would meet up again?

I didn’t put much weight on that, but sure enough, the Aussie arrived in LALA Land and reached on out. With such delightful magnetism, one would assume he would know a million people here- and sure enough, that was the case. He is the one person I know that can probably out-activity me and out-storytell me any day of the week. Conversations with the Aussie are anything but dull- it is quite fascinating unearthing the inner workings of this creative entrepreneur.

So alas, in one recent and particularly engaging conversation, the Aussie introduced me to the term  ‘FOMO’.

FOMO is an acronym- and apparently a familiar acronym in Australia. What does it mean?

Fear Of Missing Out. 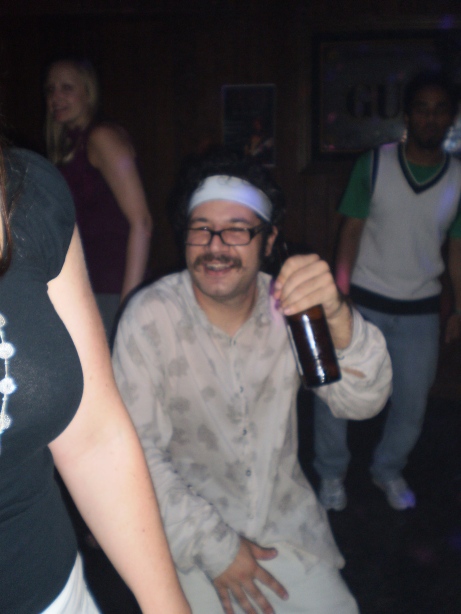 Does this party-rocker incite the FOMO in you? Sixth Street, Austin, TX, 2011.

Isn’t it interesting that because this phenomenon is so common, there is an actual acronym created for its existence? In LA you see FOMO almost daily… especially in Hollywood. One of my exes had a serious case of FOMO for the entire two years I dated him. He was so concerned he would miss out on seeing/being seen, he was out nearly four to five nights a week.

I think most of us realize FOMO dissolves over time, and as we age, when things/places/people/scenes start looking identical and becoming a blur. Resonance disappears, there is nothing to hold onto… other than maybe a new hangover, drinking buddy, or hook up. I think your late teens/early twenties are prime for FOMO… here’s to hoping in your thirties and forties FOMO is not crippling your decision-making skills.

I can confidently say I have been cured of FOMO. I have quite a bit going on in my life, to the point where time truly is precious. If I am going out, it’d better be with some people I care about, or experiences that matter- because my time is limited and valuable. For me, at this point, my time needs to be spent with those people and things that are most important and relevant to my life.

Do you suffer from FOMO? Well, now there’s help…. heh heh. Just kidding. I had to throw that in there. Too easy.