My blog has a tagline… “Thoughts, inspiration, balance… and randomness.”

This is gonna be one of those random posts.

I can’t tell you how many times I’ve told people about my favorite animals. Part of it is for comedy’s sake. I think most adults find it amusing that a thirty-five year old gal would have a list of favorite animals. Mainly, I want people to know about them. The more people are educated about animals, the more respect those animals receive.

Today, I’m going to share with you my twelve most favorite animals, why they rock (all animal facts from http://www.nationalgeographic.com), and how you can wear a kick-a$$ t-shirt of them (most of these sites offer men’s and women’s styles).

Why they rock: When a pig is smaller than a cat, how can you not think it adorable?
Micro pigs are a lot like dogs; they understand verbal cues, can be destructive, and can be potty trained. Just to clarify, they are actual pigs, and NOT dogs, so you may want to keep this in mind if you’re thinking about getting one. Also, expect a two-year waiting list. 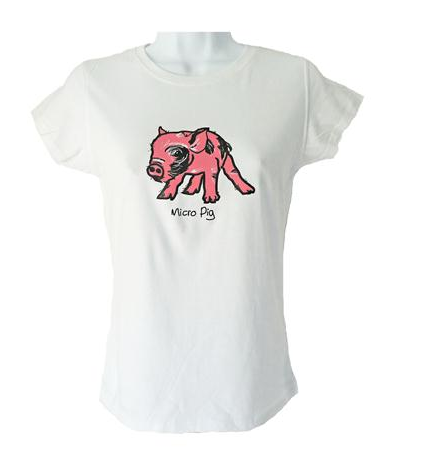 Why this t-shirt rocks: It’s actually the only one I liked that had a micro-pig on it. And it matched my photo! 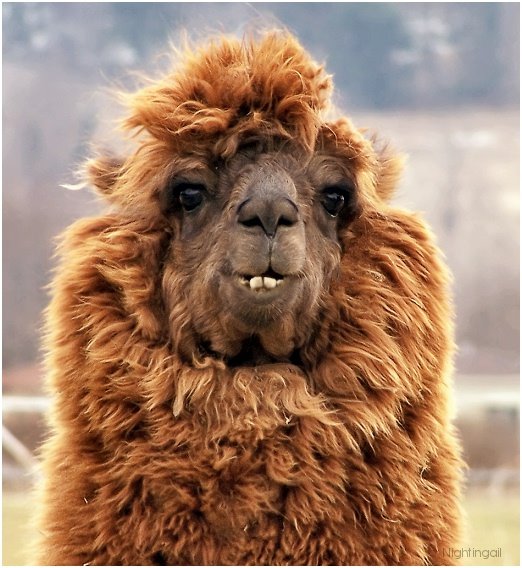 Why they rock: Look at this dude. How cool is he? Alpacas are odd beasts, related to the camel, and resemble a llama, but are MUCH larger and produce a more luxurious wool. An alpaca farm is one of my dream retirement jobs. It takes about 5 acres for twenty alpacas, and they are about $10,000-22,000 per alpaca… a pretty penny. But the investment does pay off, as alpaca wool is highly sought. They are just cool, chill animals.

Why this shirt rocks: There are very few alpaca t-shirts out there, believe it or not. This shirt is the simplest and coolest one. Side note: there are like millions of llama shirts.

Why They Rock: These little dudes are amazing swimmers. They are super sleek and so so cute. This is a pic of me holding a little guy in Thailand. Sea Otters and I also have the same favorite foods: sea urchins, crabs, squid, octopuses, and fish. Sea otters are meticulously clean. After eating, they wash themselves in the ocean, cleaning their coat with their teeth and paws. They have good reason to take care of their coats—it helps them to remain waterproof and insulated against the cold.

Why they rock: Ok, I actually have a love/hate with jellies. I think they are so beautiful to look at, but I can’t stand them. Kinda like … Kim Kardashian or something. They are annoying and hurt like hell and get in the way. But they are really really pretty.

Why this shirt rocks: How sweet is this? I love me some Venn diagrams. Sharp Shirter did good with this one. 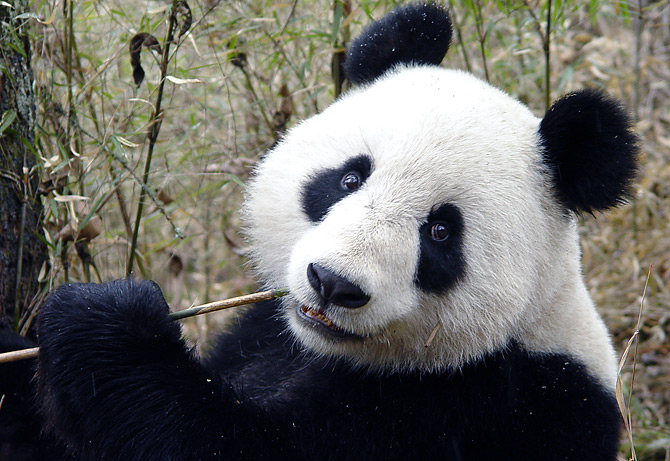 Why they rock: Who doesn’t love a panda. Seriously. I challenge you to find someone. They are one of the most photogenic of the animal kingdom. I haven’t seen a bad panda pic yet. They may appear sedentary, but they are skilled tree-climbers and efficient swimmers. Giant pandas are solitary. There are only about 1,000 left in the wild.

Why this shirt rocks: Dude, you can’t tell me this shirt is not bad-a$$. In fact, I bought one and I get double takes when I wear it. F you for endangering us, man!

7. Beluga Whale, but Whales in General 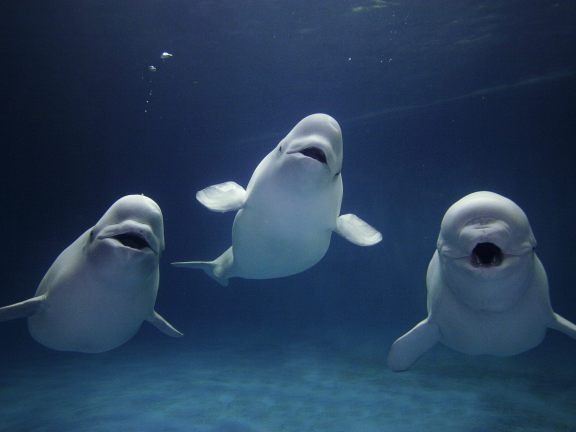 Why they rock: I love all whales (and dolphins) but Beluga whales are my favorite. If a cute little dolphin and the Stay-Puft Marshmallow Man got together and had a baby, it would be a Beluga. How freakin cute are these things. The first time I ‘met’ a beluga was at the Vancouver Aquarium. She was so graceful and white and majestic.

These white whales are smallish, ranging from 13 to 20 feet (4 to 6.1 meters) in length. They have rounded foreheads and no dorsal fin.

Belugas generally live together in small groups known as pods. They are social animals and very vocal communicators that employ a diversified language of clicks, whistles, and clangs. 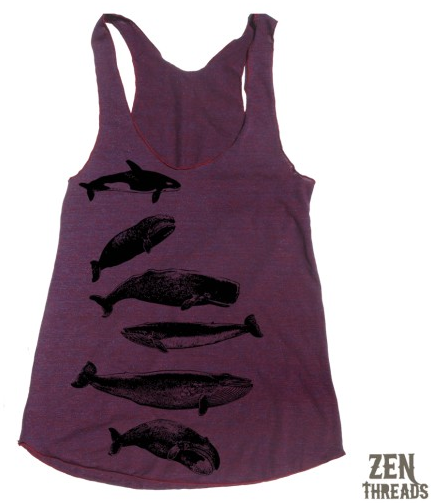 Why this shirt rocks: First off, it looks SO comfy. Also, it has all the whales on there, not just beluga… I could only find one cool beluga shirt and they don’t make it anymore! Save the whales, they are gorgeous.

From Ashes and Snow. http://www.ashesandsnow.org

Why the rock: Uh, why don’t they rock? Elephants are so freaking cool.

Why this shirt rocks: for the same reason an otter in glasses rocks- it just works. Elephants are super cool!

Look at this face. http://www.flyawayfox.com

Why they rock: These are some of the CUTEST lil things alive and they live in some of the HARSHEST conditions ever. Think: Suri Cruise. Lol (although, she is ‘free’ now).

Fennec foxes dwell in the sandy Sahara and elsewhere in North Africa. Their nocturnal habits help them deal with the searing heat of the desert environment, and some physical adaptations help as well.

Why this shirt rocks: How do you not crack a smile when seeing this shirt?

Why they rock: I’ve been in lurve with Koalas since I was a kid. I don’t know why. I think someone gave me a little stuffed koala bear toy and I loved it to pieces. Koalas and I have something in common- we LOVE sleeping!!! They can sleep up to 18 hours a day. After giving birth, a female koala carries her baby in her pouch for about six months. When the infant emerges, it rides on its mother’s back or clings to her belly, accompanying her everywhere until it is about a year old. Can’t wait to see/meet them in Australia later this year.

Why this shirt rocks: this is the only cheeky shirt I could find with koalas! Makes sense, they are too cute to be anything but cute. We all don’t want to be Stage 5 clingers, but the baby Koala can’t help himself.

Why they rock: Uh, duh. They’re little horses. Who doesn’t like a little horse? I first fell in love with the mini-horse back on the MTV show, Rob and Big. Rob (or MTV) decided to buy a mini-horse and bring it back to his Hollywood Hills home (probably not the smartest idea). Mini-Horse (as she was called) captured my heart and I have been in love with them ever since.

Mini-horses are touched by God. http://www.cafepress.com

Why this shirt rocks: It was hard finding a mini-horse shirt that wasn’t cheese-ball po-dunky. I think this one is meant to be serious, but I thought it was pretty funny.

Why the rock: When you look like you’ve been birthed by an Ewok and Chewbacca, how can you not love ’em.

If Kristen Bell can freak out this much wanting to meet one, you’d better bet your bottom dollar they are a cool animal:

The sloth is the world’s slowest mammal, so sedentary that algae grows on its furry coat. All sloths are built for life in the treetops. They spend nearly all of their time aloft, hanging from branches with a powerful grip aided by their long claws. Though quite clumsy on land, sloths are surprisingly good swimmers. 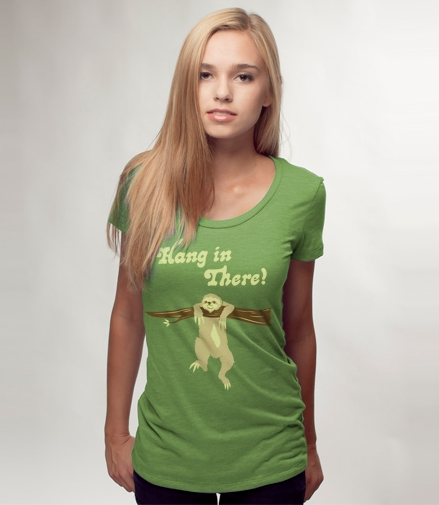 Hang In There T-shirt, http://www.tshirtvortex.net

Why this shirt rocks: It’s super cute and spot on!

Why they rock: Oh, where do I begin with my favorite animal, the goat. If you’ve known me for some time, you know that I revere the goat and think it is the most miraculous creature on earth. Here’s why I love ’em.

1) They’re darn cute. Go to a petting zoo and just tell me they aren’t cute.

2) They eat everything- tin cans and garbage (they aren’t supposed to), weeds, whatever. In Seattle, you can rent a pack of goats for a weekend and your field’ll be cleared.

4) They can climb trees.

goats in trees in morocco. http://www.odee.com

5) They make really healthy milk and super yummy cheese. Especially with beets. yum. One of my faves at Darren’s. 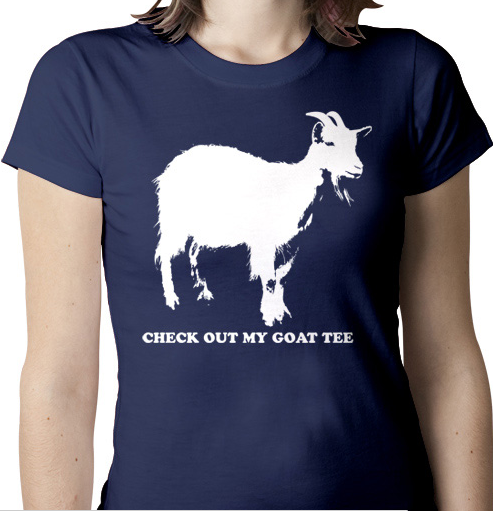 Check Out My Goat Tee, http://www.ex-boyfriendcollection.com

Why this shirt rocks: It actually doesn’t rock that hard. This is the only goat shirt I could find… which saddens me as my most favorite animal has my least favorite shirt. In fact, the lack of quality goat wear inspired me to sign up for an eight-week silkscreen class at Otis School of Design so I can make my own damn goat tee. I start next month!

These are my favorites animals (besides dogs, of course), and their corresponding tees. If you could make a kick-a$$ shirt of a rockin’ animal… what would it be?