I hosted half of my lovely bookclub ladies here over the weekend. The book was based on Korea, so I decided to reach out to one of my culinary Korean friends, and asked her what I should make. Not only did she forward me a web site for a recipe, but she sent me the address of the closest Korean market to my house.

Let me take a moment to describe my experience before I give you the recipe.

I was looking for Freshia Market in Torrance, CA. When I arrived, it appeared it had been replaced by Always S Mart. I wasn’t sure at first if this still was a Korean market, as the name of the market had changed. I grabbed my list (below) and headed on in the through the double doors. The first thing I saw in this ‘grocery store’ was a jewelry counter, and a cell phone store within the store. Ok, so it’s like Fred Meyers, I tell myself.  Except, nothing is in English.

I looked around and wonder if people are looking at me wondering why I was there. The last time I felt that way was when I got shut out of Disney Hall for being late, so I hopped over to RedCat on my own, bought a ticket for the show and realized I was the only non-orthodox Jew, well only non-Jew in general,  in the joint. I came up with a story that I was a clarinet player doing research on Klezmer. No one asked.

Get me some Klezmer

Just like that experience. No one asked me anything. But I certainly asked them a lot. I bought everything (except the beef and eggs which I bought at Whole Foods) at this market. The Kosari (fern brakes) were tougher to find, but I did find them (these are the stems of fern leaves- which by the way, if you consume too many of these they can cause cancer -so while I’m sure using them a few times won’t hurt, the wikipedia page on this kinda freaked me out!).

I had a tough time picking between the many brands of Costco-sized bean sprouts (I mean, what is the difference?), but the rest of the vegetables were pretty easy to find.

Meanwhile, Korean women were stockpiling fruit in their carts like it was 1999 just before Y2K. I went up and down the aisles feeling like an idiot, but I managed to gather everything, including Laver Seaweed for a snack (the picture showed a stack of seaweed with a beer!). And a women had set up shop with her hundreds of containers of kimchi (which I bought).

I was able to make it out of the market just under $45. Pretty good.

The parking lot? Not so good. I had a bit of an obstacle course on my hands. The drivers were AWFUL. Awful. No one was watching people back out, people were pulling into spots and changing their minds and pulling out of spots, all while I was patiently sitting in reverse, waiting to pull out of my spot. My turn finally came and I dodged the rest of the cars to make my escape.

Ingredients in hand, here is the recipe for Bibimbap, Courtesy www.maangchi.com.

Recipe:
Arrange everything on a platter.

1. Cook rice. You can use a rice cooker or a stainless pot.

2. Next, you need to prepare a large platter to put all your ingredients on. Rinse your  bean sprouts 3 times and put them in a pot with a cup of water. Add 1 ts of salt and cook for 20 minutes. Drain water and mix it with 1 clove of minced garlic, sesame oil and a pinch of salt. Put it on the platter.

3. Put your spinach in a pot of boiling water and stir it for a minute. Then rinse it in cold water a few times and squeeze it lightly. Mix it with a pinch of salt, 1 ts of soy sauce, 1 clove of minced garlic and sesame oil. Put it on the platter

4. Cut 2 small size zucchini into thin strips, sprinkle them with a pinch of salt, and then mix them together. A few minutes later, sauté them in a pan over high heat. When it’s cooked, it will look a little translucent. Put it on the platter. 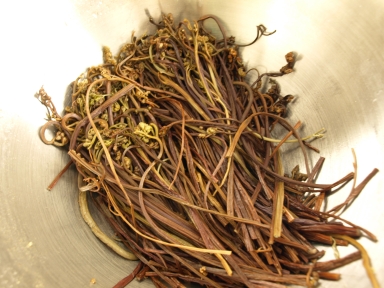 5. You can buy soaked and cooked “kosari” at a Korean grocery store. Prepare about 2 or 3 cups of kosari for this 4 servings of bibimbap. Cut it into pieces 5-7 cm long and sauté in a heated pan with 1 ts of vegetable oil. Stir and add 1 tbs of soy sauce, 1/2 tbs of sugar, and cook them for 1-2 minutes. Add sesame oil. Put it on the platter.

6. Slice shiitake mushrooms thinly and sauté with 1 ts of vegetable oil. Add 2 ts of soy sauce and 1 or 2 ts of sugar and stir it for 2 minutes. Add some sesame oil, and put it on the platter.

7. On a heated pan, put some oil and 200 grams of ground beef and stir it. Add 4 cloves of minced garlic, 1 tbs of soy sauce, 1/2  tbs of sugar, a little grounded black pepper, and sesame oil.

9. Cut a carrot into strips, sauté it for 30 seconds and put it on the platter.

10. prepare eggs with sunny side up.

11. Put your rice In a big bowl, and attractively display all your vegetables and meat t. Place the sunny side up egg on the center.

12. Serve it with sesame oil and hot pepper paste.

Now that I’ve fed your mind with a yummy recipe- I feel like a complete ahole. The reason why is because this book was actually about North Korea, of which millions of people are still starving and malnourished. Not to mention all of those who have already perished from starvation. Clueless me had no idea about anything that had to do with that country, other that what I’ve learned through Team America, George W., bits about the Korean War, and being communist like Cuba. That was my knowledge. And here we bookclubbers are, gorging ourselves on Bibimbap while who knows what some child is scraping off the floor of a train in a major city in North Korea.

The book we read was Nothing to Envy: Ordinary Lives of North Korea by Barbara Demick, former LA Times writer. Ms. Demick’s writing is reflected eloquently in her journalistic style.  There are a couple of stories that last the duration of the book, peppered with smaller stories throughout. The stories are directly from people who spent the majority of their lives under the “Great Leader” Kim Il-Sung and his heir, Kim Jong-Il.

It begins with the arbitrary line the U.S. drew in the sand to split North and South Korea after the Korean war (which is the basis for all hatred toward the U.S). The life stories in the book are about love, loyalty, and survival. It is about a Communistic Socialist government who ‘cares deeply’ for its citizens, but yet cannot take care of its own people as a whole. People have been working for free for years, and those who do earn money, do so illegally since that is the only way.

The face of the nation is Pyongyang, a city that shows North Korea is not only doing alright, but thriving. It is outside these city walls, where labor camps, malnourished children, dead bodies lie in the streets. It’s not just africa where starving children with bloated bellies, bony limbs and enlarged heads reside. The people resort to desperate measures to get a piece of corn to eat- it is difficult to read and heartbreaking to hear- especially since the government does nothing to acknowledge it, doesn’t provide any assistance, doesn’t pay them wages, and doesn’t allow them to start businesses. They will however, spend millions on nuclear programs and the third largest military in the world- for a geographic area the size of Pennsylvania.

Most of the stories take place in the 90’s… a time when I was worried about having a first boyfriend and partying it up on my 21st birthday in Greece. Meanwhile, my peers in North Korea were looking for a scrap of food or dying in the streets.

I want to give a copy of this book to all the people who think America is becoming socialist so they can read about a living breathing socialist/communist society like North Korea. If you think you know about Stalin Communism, check your knowledge through this book. I’d also love to give a copy to the extreme anarchists out there- if they want to live in a capitalist-free society, hey, stop spraypainting Niketown, pack up your black wardrobe, and a move to North Korea just may be for you.

North Korean defectors trying to get others to South Korea. http://www.supkorea.blogspot.com

Reading about North Korean defectors assimilating to South Korean society reminded me of releasing a whale back into the wild. Or Morgan Freeman from Shawshank Redemption after he had been set free from prison. These people have essentially been living in a place without electricity, one hour of running water per day (if that), government telling them what to do and say, having people everywhere spying on you, and no food. It is still 1960 in North Korea (except to the government), so jumping in a time machine and coming to Seoul in 2012  can be a bit jarring.

Definitely a recommended read, especially if you are completely oblivious about that isolated country (like I was)- if anything, get yourself aware. It is a sad, bizarre, fascinating read.