This weekend was very LA for me.

Woke up to sunshine. Went to yoga. Went to dinner with a friend, but met other friends while at dinner.

Woke up to sunshine again, strolled down to the beach for some sunbathing for a couple of hours, then headed to a BBQ.

When jmia asked if I wanted to attend a barbecue with her, I originally thought, “I’m too lazy,” but when she said, “It’s in Venice,” my mind started to change a bit. It was rare for me to see my lovely friend jmia so near to my home base. So I agreed.

If you are not from L.A., you should know that while “L.A.” is actually a city, L.A. also is in reference to many cities intertwined within its namesake. The neighborhood of Venice, although once its own city, is actually officially known through its mailing address as Los Angeles. It is one of many neighborhoods and cities that comprise L.A.

Venice has its peculiarities. That is what it is most famous for- the street vendors, performers, smell of incense (and other varied scents), names on rice, tattoo parlors, freak shows, Muscle Beach, Lou Feriggno, and Arnold Schwarzenegger. 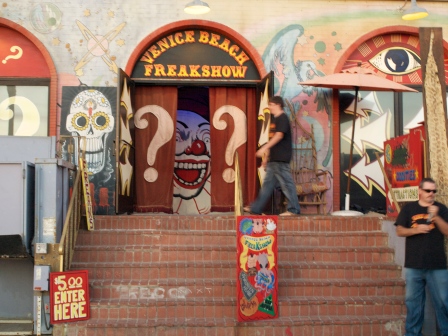 There are cute, hipster areas like Abbot Kinney and parts of Rose St., then where Main St. turns into Santa Monica.

Venice also has the canals- the romantic bodies of water that emulate the real Venice – on a much smaller scale, of course. Hence, the origin of its name. This awesome online museum from KCTS is a fascinating timeline on the creation of Venice.

Venice: where art meets crime. Venice is just different. It’s different from every other part of L.A., so that is what makes it interesting.

So this is where I spent my Sunday afternoon.

Jmia knew one of the inhabitants… a film director whose roommate was having a birthday (this is kind of how it works). We showed up at this house and it was from another time, and another set of architectural rules. It was a fascinating maze of rooms, none making sense, except one with a sink and stove (kitchen) and one with a sink and tub (bathroom). I was pretty sure this house would not survive “the Big one”. Jmia and I pretty much stuck together the whole time, meeting several people, and one fascinating character, “Mikey”(or that was what we called him), with fake cigarette in one hand, corona in the other. His playful green eyes, Indiana Jones hat, and striped, rolled-up, pocketed sweat pants kept us entertained most of the time we were there.

The place smelled of nicotine, marijuana, charcoal – all in the form of smoke, and my hair was absorbing it all at an alarming rate. I enjoy people watching at these functions- you can overhear conversations like, “Gawd, wasn’t the cinematography amazing?” to “what’s happening with your latest project?” I was wondering if I didn’t dress hipster enough for this crowd. I also noticed a lot of hair. Women’s flowing hippie-locks. Men’s head and chest and facial hair seem to grow into one mass everywhere.

My only regret was not bringing my camera and capturing everything and everyone there.

But it was fun. Entertaining. Interesting. And very L.A. People were very interesting. I met a couple new ones, and jmia and I had fun together. The place was scattered with chicks in four-inch wedges, dudes in white v’s, and random garden objects throught the yard. Alas, I could only stay a couple of hours. Needed to get back to hang with one of my other favorite people as a housewarming/belated bday chill night.

Ah, another weekend in L.A.