By the moon and the stars in the sky…

Ok, not really. Although that song was like the best song for school dances. And I now apologize for getting this song stuck in your head if you had pressed play. I also love the one white guy with glasses. Love it. And the saxophone solo. But we know how I feel about instrumental solos. And how messed up is it that four dudes are chasing a single girl down an alley? Kinda messed up if you ask me. Ok, enough about the video, lol.

But really, I swear…

Actually, I need to stop swearing.

Lately, I’ve been using the f-bomb like it’s been going out of style. It’s unladylike, unyogalike, just unlike. Unbecoming.

I’m trying to figure out why it just rolls off the ‘ol tongue like “apple,” or “fondue,” or “tampon.” I don’t know why I’m having an explosion of expletives. Work has been stressful lately. And the home search. And I haven’t been able to get to yoga because of both of those reasons, so there’s that.

I think the f word is very commonplace in Los Angeles. People use it all the time in sentences, whether in excitement or in rage. It’s the universal, you-understand-the-emphasis-on-this-thing word. I didn’t think much of it. If I drop it here and there who cares. If I drop it three times in a sentence. Whatever. It’s helps the tale along.

Then I overheard a guy at lunch the other day saying, “F this, F that, the F’in F F F.” I was at the table next to him, listening to him jabber away to his buddy. And he sounded… gross. Aggressive. Unattractive. Crass. Someone I would never date. I thought to myself, there are thousands of words in the english language, can’t you replace at least seven of those fs with one of them?

And I do not want that at all- to be dbag dude.  Moreover, I do not want it to be so commonplace in my life that it just slips out among children or the elderly. Or my family. Or a business associate.

How do I give it up? How do I stop the fbomb from integrating into all facets of my life? I’ve been thinking of ways to curb the habit.

PAY FOR IT: Do swear jars really work?

THE OL’ SOAP TRICK: What about a bar of soap, will that kill it all? I mean, Ralphie was certainly affected by the bar of Lux soap.

SUBSTITUTION: I’ve been trying to replace f with fudge, or freak or frick… I am able to get away with that in settings where audiences may be offended by such language. But even then, frick, or freak should just be removed entirely.

If f separates the rating of R from PG-13 in a movie… that would mean I am rated R. This is not good.

I discovered that there is an actual web site called www.cusscontrol.com, 10-steps to stop swearing- from the Cuss Control Academy. No joke. Well, here goes nothing…. consider me enrolled.

Ten Tips for Taming Your Tongue by Cuss Control Academy

Follow these links or scroll down through each page to learn how to tame your tongue.

1. Recognize that swearing does damage.
You probably swear because it is easy, fun, candid, emphatic, expressive, breaks rules, and somehow partially reduces anger and pain. But the negatives outweigh the positives.  Swearing doesn’t get you hired, promoted, or romantically connected.

2. Start by eliminating casual swearing.
Pretend that your sweet little grandmother or your young daughter is always next to you. Use inflections for emphasis instead of offensive adjectives.

3. Think positively.
Look to the bright side. Develop a “can do” attitude. A positive mental attitude not only eliminates lots of swearing, it brings you contentment and brightens your personality.

4. Practice being patient.
When you are stuck in line or in traffic, ask yourself if a few more minutes matters.Talk to someone, even a stranger in line with you.

5. Cope, don’t cuss.
Each day can be filled with aggravations, delays, disappointments and frustrations.  So stop cussing and learn to cope. 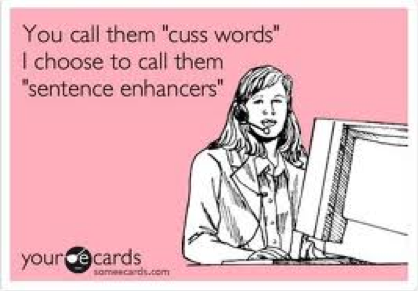 6. Stop complaining.
Before you start griping or whining about something, remind yourself of a very important reality: no one wants to hear it! Why would they? Avoid complaining about matters that you and the people with you have no control over.
7. Use alternative words.
English is a colorful language, but chronic cursers repeatedly use the same, unimaginative words that have been around for centuries. Take the time to develop your own list of alternatives to the nasty words you now use. For example, instead of B.S., choices range from lie, fabrication, nonsense and exaggeration to bunk, baloney, drivel, malarkey, hokum, hogwash and balderdash.

8. Make your point politely.
Some substitute words can be just as offensive if your tone is abrasive or you insult someone. Instead of “Who gives a flying f___?” to “I don’t care,” to “It really doesn’t matter,” or “I think my way is faster.”

9. Think of what you should have said.
It is easy to blurt out a swear word at an inappropriate time, or to bark out a tactless or tasteless remark before you have a chance to consider the impact. After you shout an expletive, simply say the tamer word you wished you had said.

10. Work at it.
Breaking the swearing habit might prove to be no easier that losing weight, giving up cigarettes, or correcting any other habit. It takes practice, support from others, and a true desire to be a better person — not only by controlling your language, but the emotions that prompt you to swear. Here are a few exercises to condition yourself:
• Think in clean language, and switch negative thoughts into positive solutions.
• When you are on your way to a situation you know will test your temper and your tongue, plan ahead what you will say and how you will say it.
• Tell your family or friends what you are doing, and you will be more cautious around them.
• Determine when and why you swear the most, and develop your own tricks for changing your behavior.